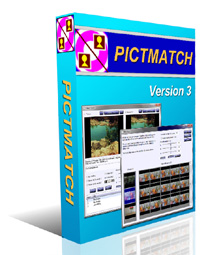 PictMatch compares groups of pictures, finding duplicate or similar images and displaying them in a useful way. If you like to organize your family photos, of if you like to download photos from Internet, PictMatch can save a lot of time and disc space for you.

Compare picture files across different folders, recursively or not.

Optionally exclude parts of the pictures (ex. logos) from comparison.

Create groups of similar pictures and move them to separate folders.

Search your disc for a specific image.

The exact comparison is extremely fast, while the similarity comparison lets you identify photos that are visually equal, but differ in compression rate, format, resolution, contrast, color and so on. You can even ignore logos and text when comparing! Files types can be different (jpg compared to png, for example). When detecting a match by similarity, the program is smart enough to try to keep the image with better resolution, better contrast and much more - you decide.

You can maximize the matches window, to see the photos side by side with better resolution. You can also zoom the photos for maximum detail. When zoomed, you can scroll the photos to see all parts of them.

You can rename the duplicate files in many ways, move them to a folder or simply delete them.

After detecting the duplicate images, the program can execute the selected actions immediately or write them to a BAT file, for later execution. 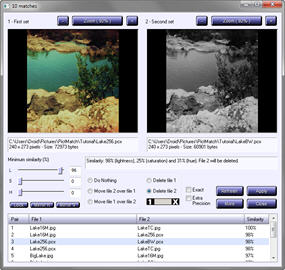 With PictMatch you can automatically create groups of visually similar images and optionally move them to separate folders.

This feature intends to let you group beach with beach, garden with garden and so on. As you can see from our example on the left, the images grouped together do not need to have high similarity, they only have to be related enough to be identified as belonging to the same kind.

If you want, you can later join groups together or move individual files from one group to another, by simply dragging and dropping them to the intended groups. 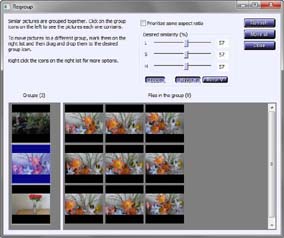 You can optionally configure up to six exclusion areas in the pictures (overlapping or not), in order to detect matches, regardless of logos and subtitles. For example, you can instruct PictMatch to detect these two pictures on the right as being a match. 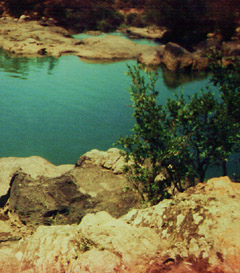 Find pictures on your disc

Do you need to find a specific picture on one of your hard discs? Do you have a similar picture, maybe a little different, or with different size/resolution/format, or even black and white? A thumbnail, perhaps?

If the answer is "Yes", then PictMatch can help you. PictMatch can perform a search on your discs, identifying every image file that looks like your original reference picture and putting them on a list for you. Then you can open the original file folder, move it to another place, get information about the picture or even delete it to the recycle bin (if your Windows is configured to do so when deleting a file). 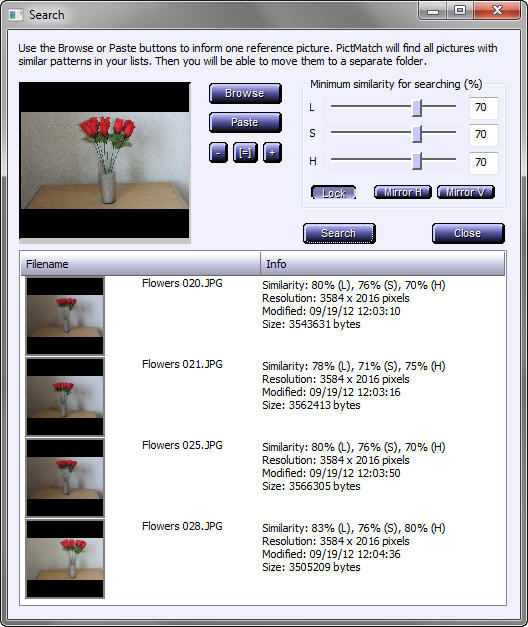 On dual or multi core computers, PictMatch can compare many pictures at the same time, increasing the overall speed.

The evaluation version of PictMatch does not have expiration or time limit. All program features work, only the number of duplicate pictures you want to remove is limited. If you license PictMatch, you will know exactly what you are paying for!

• For a limited time, the promotional price after trial is only US$12*

Click the right button of your mouse on one of the two links below and choose "Save As" (or equivalent) to download the Windows™ FREE evaluation version of PictMatch.

(single installer for both 32 and 64 bits versions)

Why not?  PictMatch is powerful and can be better and better if more and more people like YOU register it. The registration fee will help us to improve PictMatch in future versions. It's easy! Just click on the left to select the secure payment method you want to use and submit the form. We respect your privacy.

*NOTE: in some countries, actual price may change due to local extra charges and taxes.